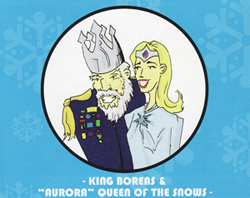 A long, long time ago, Astarios, the god of Starlight, and Eos, the goddessof the Rosy Fingered moon, were wed and blessed with five sons. The eldest,Boreas, was granted the title of “King of the Winds.” On his extensivetravels, he came upon a winter paradise. Boreas whistled in sheer ecstasy,”I will make Saint Paul the capitol of all my domains. It will henceforthbe emblazoned to the world as the winter playground of the Realm of Boreas.”He reigned over the kingdom along with his Queen Of The Snows “Aurora”,the fairest maiden in the realm. Upon the good counsel of the Queen, Boreasbade farewell to his kingdom in the interest of peace and returned to dwellamong the gods of Olympus. 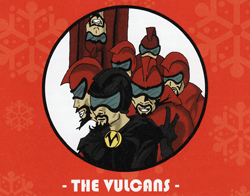 Vulcanux Rex is the King of Fire who battles to end the cold of winter, and seeks to bring the warmth of summer back to the beautiful City of Saint Paul. Each year, Vulcanus Rex chooses a Krewe of seven men to help him chase Boreas and his wintry ways out of town: 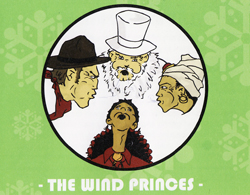 These four brother of King Boreas were each assigned a permanent grant of great force and power.

Titan was given the North Wind – A wind known to be blustery and cruel – yet fraught with virility, strength and abounding in health giving elements.
Euros was given the irresponsible East Wind – A wind with moist and warm breath which brings rainfall and melting snows – yet often a sinister destructive force in storm and fury.
Notos was given the balmy South Wind – A wind gentle and deceptively frail, often heavy with clouds and moisture, frequently causing men and beasts to be sluggish and sickly
Zephryus was granted the bountiful West Wind – A gentle yet forceful wind, dependable and nourishing. It gives life and strength to plants and flowers and brings solace and comfort to men and beasts. 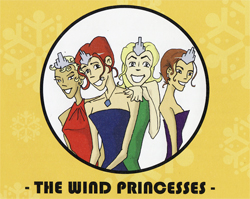 There are four Wind Princesses who each accompany one of King Boreas’ brothers. The kingdom of wind and snow is ruled by King Boreas, the Queen of the Snows and his royal court, the Winds and their lovely princesses. The first Queen of the Snows and Princesses were crowned in 1886. The roles of Queen and Princesses were changed to its current version in 1937. In 1916, the judges had such a difficult time choosing the Queen that the entire group of more then one hundred candidates were all crowned! Winter Carnival is full of magical and unique memories! 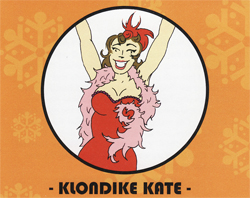 She struck it rich in her own way in the Gold Rush of 1898 – as the most famous dance hall girl in the North. She so charmed the legions of miners that they showered her with gold dust and nuggets and nicknamed her “Klondike Kate.” She had beauty, charm and a man who “done her wrong.” She was Kathleen Rockwell, and she made her way across the mountains to Dawson City and gold fields around the Yukon and Klondike Rivers, just as many others did during the Gold Rush of 1898. When the St. Paul Winter Carnival began, Klondike Kate could easily have been the first to entertain at the Casino.

In the Realm of Boreas there exists an organization so filled with history and heritage, and although young in years, must be considered a tradition. It was just after World War II that the dominion found it was lacking a proper army to defend against Vulcanus Rex and his Krewe of dastardly deeds. Notwithstanding expense, Boreas sent word to those returning servicemen that trained their commissions to become Guards for the throne of Boreas. Defend the throne they did, in fact, several of these same men so please the Royal Court that they too, were later on selected to be Kings, Prime Ministers and Winds to rule the Kingdom.